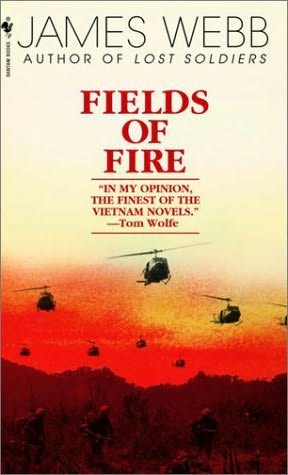 Right now I’m reading the Vietnam war novel: Fields of Fire, by James Webb. Webb is one of the most highly decorated combat Marines who served in Vietnam, and he has served in a variety of government positions, including Secretary of the Navy and Assistant Secretary of Defense. He is currently the Democrat Senator for Virginia.

One of the main character refers to himself as Snake, a tattoo of a serpent on his arm, and fresh ink of a skull and two crossed daggers on the other. The words: Death Before Dishonor under the daggers. A down and outer who harbors a rage that makes him an outcast in society. But than he finds the Marines and his rage is now a strength. He never quits and his smoldering fury motivates him, drives him to prove to the world he has the right to exist.

Here’s a line from the first chapter:

“The trivialities of boot camp rolled off him….He was beaten, but did not flinch….Beat me, Sergeant…It ain’t any different. You can’t squash me, and if you can’t squash me, you lose. More, sir. Harder, sir. Faster, sir. I love it, sir.

It created a mystique about him. His ability to endure, that iron shell from which all other traits derived, was also a magnet that drew the other recruits to him…his reasoned suggestions without regard to pain, caused him to be the man they sought for guidance. And he loved it. To merely endure, to accept the pain that others feared and dreaded, was the ticket to dignity that had eluded him all his life. And to fight, to grant his natural ferocity its whims, now brought him accolades instead of trouble.”

I relate with this character. Everyday, when I get up and face the harshness of military life, the asshole NCOs who crowd out the decent, the tough runs and hundreds of pushups. The hours of studying for what is sure to be the toughest week of my life at the INSCOM Soldier of the Year event. I love the pain. I can feel the universe flinch when I smile at discomfort. It’s not supposed to be that way…

When pain becomes your fuel, you’ll find yourself capable of things you thought impossible. There will be no more depression, no more stress, only a Zen Mind capable of forgetting Self and doing the job and summoning a dark joy that’ll power you like a diesel engine. When I was in AIT, and the 1st Sergeant was doing sprints around the track with us, I was one of the few that could keep up with him. He was in incredible condition and could rip off pushups like he was a human jackhammer. He pointed to me and said to someone beside him: “I like that guy–he’s Diesel.” I’d never heard that term used as an adjective before: Diesel. But I understood.

Be Diesel. Don’t let hard times get you down. Eat it, chew it, spit it on the ground.

This entry was posted in Uncategorized and tagged Book Review, Fields of Fire, James Webb, Self Improvement.